Camila Falquez’s style is split into two parts. On one side, she is a fashion photographer, setting up her subjects in a well-dressed studio space. Her other side is where she keeps her eyes open to the candid scenes of the world. She gained my interest, and now she has my full attention.

David Uzochukwu is a self-taught fine art and portrait photographer, coming from Innsbruck, Austria. His images break the convention of identity, whether simple, straight shots or photographically manipulated. They are so powerful they became part of Adobe, Dior, and Nike advertising campaigns.

Nicholas Scarpinato is a fine art photographer of high standing. Based in Los Angeles, his work emanates a vivid, emotive and somewhat surreal feeling. He likes to incorporate drawings and paintings into his work, which really creates a unique image.

Zev Hoover is best known for his ‘Littlefolk’ series. He spends hours creating unimaginably beautiful and seamless montages of little people in big settings. His images were so successful that he was one of Flickr’s 20 most successful photographers under 20, in 2014. His focus is shifting ideas and visions of reality. This makes him very much a photographer who follows his creative passions.

Oliver Charles is a photographer in his early twenties. His age hasn’t stopped him from working with Ralph & Russo, one of the largest British Naute Couture houses in the world. He creates emotional and whimsical images, capturing subjects in dream-like scenarios. the use of natural environments make these lines between dreaming and reality very romantic and idealised.

Alex Stoddard is a name that many of us in the photography industry know only too well. His Facebook sees almost 300k followers, and his Instagram account reaches over 40k. Elements of fantasy and dreamlike scenes fill his photographic images. They even touch upon concepts with a darker sensibility.

They are emotive works, bringing out your own connotations to help explain the concepts and ideas used. He can capture a great self-portrait, and even the titles of the images work perfectly. The title of the below image is A reflection on the state of things. 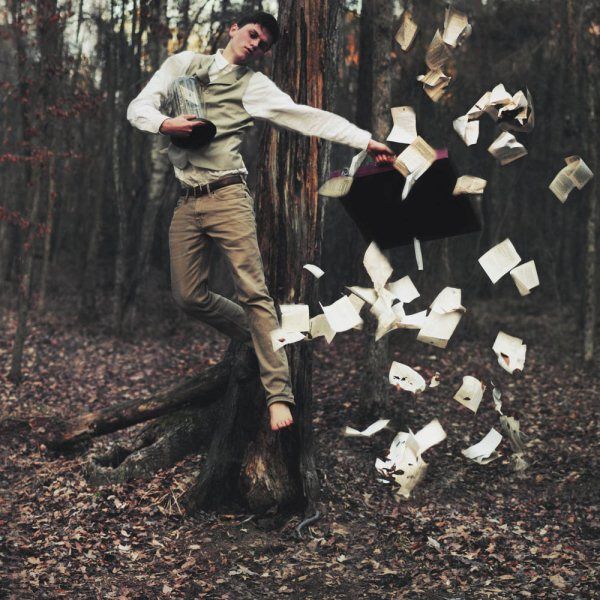 Alex Benetel is a photographer and educator in Sydney, in her early twenties. She was one of the 20 best artists under the age of 20 on Flickr. She has had an exhibition in New York, which is the rite of passage for any photographer. Her work is dreamy and changes our perspective on reality. She taps into literature and the outdoors, capturing her emotions and feelings through her photographed subjects. As a fine art photographer, she sets the bar high for others.

Isaac is our one and only dedicated street photographer on this list. A Cuban in his early twenties, living in Miami, Florida. He became a hobbyist after needing something to take his mind from his work with computers and school time. He has no preference over b&w or colour, nor whether flash is used or not. His images try to capture whatever is in his mind. If it works, great! If it doesn’t, he moves on. He places himself at the right place at the right time, and his stunning work shows these little idiosyncrasies in everyday life.

Olivia Bee is yet another recipient of Flickr’s ‘20 Under 20’ award. Hailing from Portland, Oregon, now based in Brooklyn, New York, she also frequents and works in Los Angeles, California. She is intrigued by the beauty of everyday life and how the beauty of memories (real or imagined) touches us. She has given TED talks and worked with brands such as Apple, Nike and Disney.

Born in Madrid as Jose María Rodríguez Madoz, Chema Madoz is a renowned modern photographer known for his black and white surreal images. But, he first considered himself as an arranger and, only later, a photographer. At the heart of his work, Madoz creates visual poetry, freshly extracted from his imagination with ordinary objects that he expertly arranges into mind-blowing compositions. The great simplicity of his images is Madoz’s beautiful trick because his art is exceptionally easy to digest and appreciate. His creations make us feel guilty for not being able to see the obvious that he so naturally portrays.

Through the combination of elements and shapes, Madoz creates images that are both suggestive and visually strong with exceptional personality and poetical force. His images go beyond surrealism and abstraction and, for me, are purely visual metaphors.

He is truly in love with the possibilities that objects can offer and his arrangements—most of which are photographed later with medium format film—are firm evidence of this belief.

There is little else to say about his technique beyond his adequate use of film and his keen eye that lends itself to his careful and passionate printing work. The best way to understand his work is to contemplate it more than simply seeing it. He is, without a doubt, my favorite still life artist because he’s able to see far beyond the everyday and the ordinary. He is a visual poet whose work is sure to delight you—just take a look for yourself here!

Born in Dallas, Texas as a self-described warm-hearted, old-school gentleman and explorer with really cool toys, Trey Ratcliff is an urban and landscape photographer who achieves his great passion for high tonal ranges and saturated pictures with HDR development.

The importance of Ratcliff’s style is that he documents his explorations through his camera, which gives a completely tangible sense of adventure. He crafts HDR images and, although it is not a style for everyone, his images are stellar examples of valuable and careful consistency.

For me personally, there is only one rule to follow to create beautiful HDR images and that is to stay inside the thin scope between Tonal Range Enhancement and Unreal Looks. Landscapes crave to be photographed but they also demand respect in terms of things that can and cannot be done later in editing. Ratcliff feels this respect for nature and aesthetics, but still manages to create breathtaking urban and natural landscapes.

Didier Massard produces very few images per year due to the magnificent optical manipulations he put in them. His work has considered to be more “magical realism” painting rather than photography, thanks to the ethereal lighting and romantic sense of illusion they have.

Working like this, gives his work a meticulous and slow paced rhythm. He draws his subject in a previously shot picture just as he sees it in his mind, and calls each image to be a “completion of an inner imaginary journey”.

You can watch his work here.

If you ever thought that certain images required the logistic of a movie scene, then the work of Gregory Crewdson will ring a bell to you. The work he’s been getting known for seems to be something plucked out from a science-fiction film. The common factor in the subjects of his images, is the longing nature they have on their faces. They have even been defined as mere pawns in a larger theatre game constructed in his photographs. Each of his photographs are an elaborated stage with complex theatrical lighting that seduces the viewers into a narrative that for real it may look, it probably may not even exist. Gregory Crewdson plan his photographs as if they were cinematographic productions in terms of staff and logistics. He is the creator of fictions that transcend daily life. In his own words, he likes to “create worlds in stillness and in suspension”. Click here to watch some amazing images of his.